MW Consulting Engineers is a proud member of the winning team for the University of Idaho’s anticipated Idaho Arena. 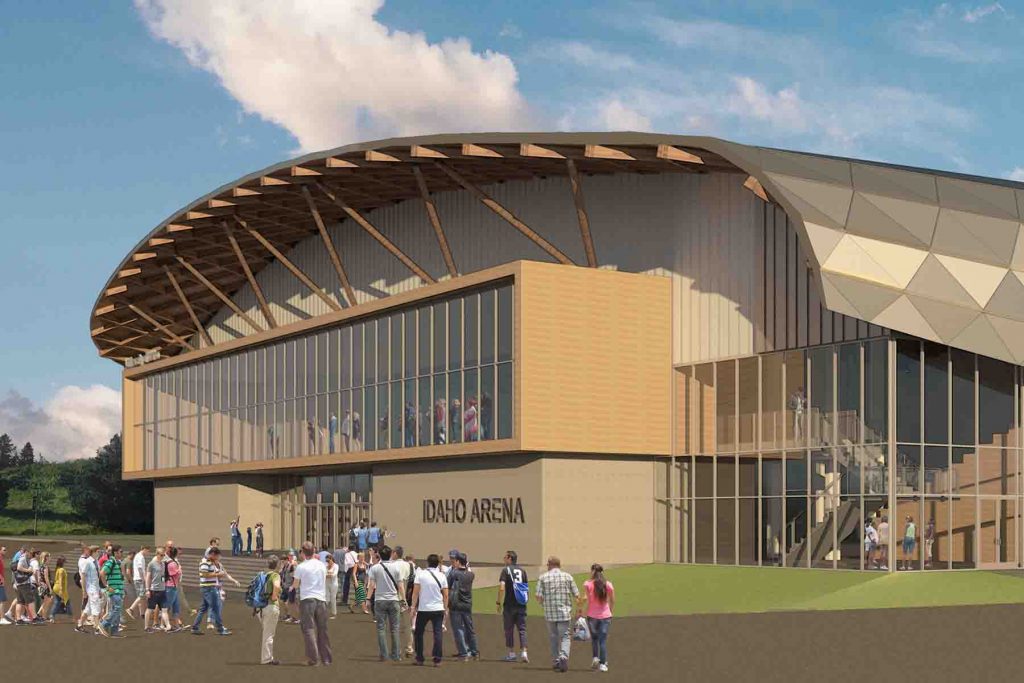 Portland, Oregon-based Opsis Architecture has been selected as the architect for the University of Idaho Arena project. The design and construction of UI’s new Arena represents an exciting new chapter for the University’s time honored tradition of collegiate athletics.  It will be designed as a multi-event and court sports facility home to several sports programs, including men’s and women’s basketball. The Arena is planned to become a catalyst for athletic recruitment.

The University of Idaho has planned the Arena to make timber and mass timber construction a focal point of the project. The UI got a nod from the U.S. Forest Service as part of a national movement to expand use of wood products in construction. A highly-competitive Wood Innovation Grant will help kick into high gear the construction of the Idaho Arena, a 4,700-seat sports and activity center on the Moscow campus. University officials comment that the timber and mass timber component connects the project to local timber industry and follows a pattern that has been used for other campus projects by tying in with the UI’s land grant mission.

The grant program is supplying $8.3 million dollars nationally and is being matched by $37 million from the 38 funded entities. The program is intended to bolster the removal of hazardous fuels in forests and reduce the risk of wildfires. UI will get $250,000 to assist with the design work for the arena.

That design work is now underway for the $30 million project. The mass timber construction identified as the construction method created a unique opportunity for firms around the world to submit proposals.

Alec Holser, Principal/Partner at Opsis, commented “We are particularly excited about working with the University of Idaho and the regional mass timber industry to design and create a national landmark arena that will celebrate the beauty and warmth of wood.”

Opsis has partnered with Hastings + Chivetta as the interior architect and consulting engineers, KPFF. Opsis has done many projects at the UI including the renovation of the UI’s Kibbie Dome, the campus centerpiece Teaching and Learning Center, and the Vandal Athletic Facility.  He is joined on the project by Opsis architect and senior associate, Chris Roberts.

Also selected is Hoffman Construction as the general contractor. By contracting with both early in the process, the contractor and designer will work together, alongside UI, to review all aspects of the design and build at that same time.

The project will involve Idaho’s forest industry through innovative uses of wood products, and access to resources and technology. It will also serve as a learning laboratory for UI students in forestry, engineering and more.

The arena will be built on the north side of the ASUI Kibbie Event Center. It will be home to Vandal basketball and volleyball and will also serve as an activity center for other university activities. The benefit to the university, its students and alumni was recognized by the University of Idaho Alumni Association, which recently committed $500,000 to the project. The project gained early support from the students who voted to contribute $15 per semester through student fees, adding another $260,000 annually to the pot.

The University plans to open the arena by 2020.

Learn more about the project here: University of Idaho Arena