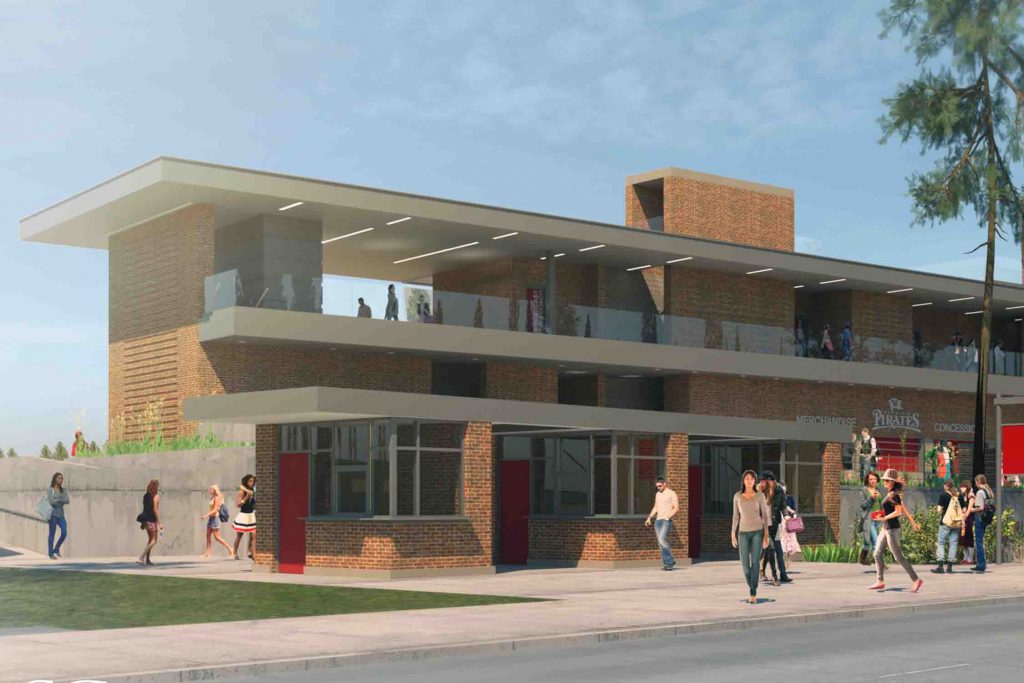 Rod Sandberg is wary of making comparisons, so the Whitworth head football coach adheres to a don’t-worry-about-them strategy. But Sandberg, who holds a 23-8 record since taking the reins for the Pirates in 2014, was quick to make this distinction: Of the eight Northwest Conference football members last fall, Whitworth was the only team without artificial turf. Playing games at the well-manicured Pine Bowl was well and good, but even tiny Washington high schools were going the synthetic route.  “Royal (City), a little farm town with a great football program. It had field lights and turf. It was beautiful,” Sandberg said while recalling a recruiting trip. “And we were the only team in our conference without turf.” Those days are over. This month Whitworth unveils its FieldTurf Revolution 360 surface, a $1 million dollar project and the first of three donor-funded pursuits for the school’s athletic department. A new amenity-filled Pine Bowl press box and a centralized athletics building – an estimated $13 million between the two projects – are still in the planning and funding stages.

The new turf, which features Whitworth’s flag logo at midfield and reads “Pirates” in both black and crimson end zones, is near completion. It’s slated for use before the football team’s Aug. 26 scrimmage. The push for a turf field was spawned last fall and the wheels were swiftly put in motion, Whitworth campus construction project manager Fred Johnston said. “We were very hungry to get this going and worked hard to make it happen,” Johnston said. “In a lot of cases, it takes around two years to do this. We had a lot of support.” Last November, Whitworth trustee Walter Oliver and his wife Kay donated $3.1 million to the athletic department to help fund the proposed plans. The turf field will also service the track and lacrosse programs. “The trend is schools going to turf fields,” Johnston said. “This keeps us competitive in recruiting, it leads to less injuries and there’s less maintenance.” A study from Dr. Michael C. Meyers of the Department of Health and Human Development at Montana State University confirmed that FieldTurf is safer than natural grass sports surfaces, citing 20 percent fewer severe injuries an 11 percent few concussions. FieldTurf’s robust national clientele includes the Seattle Seahawks, the University of Washington and Washington State University.

“The No. 1 reason I wanted this was for recruiting,” Sandberg said. “Eastern (Washington) has the red (turf), Boise (State) has the blue. Our grass field was still good, but it’s not about what you or I think. It’s about what an 18-year-old thinks and it can affect their decision.” Cade Foisset, a Whitworth junior middle linebacker, noted that the majority of his teammates’ high school fields were turf. “The turf helps us because we’re a fast team,” said Foisset, a Bend, Oregon, product. “It’s exciting. It also gives you more options. Grass is great, but during winter conditioning, it’s easier to get the snow off of turf.” Puget Sound, which has a turf practice facility, will be the only NWC member playing its home games on grass this season.

Projects in the works

Whitworth athletic director Tim Demant’s office is a five-minute walk from some of his coaches. Sandberg has to walk across the parking lot to get to a copy machine. Baseball coach Dan Ramsay essentially works out of a closet. “There’s a lot of sharing,” said Noelle Bouillard, Whitworth’s women’s lacrosse coach. Coaches and administration at Whitworth are spread throughout the campus, some in outdated digs. The building project is geared to house all the coaches together in a new, centralized location for athletic leadership. According to the proposal, the second floor is for locker rooms, offices and meeting spaces. Currently, 120 football players share 60 lockers. The new 10,000 square-foot press box is also geared to boost the school’s recruiting and boost fan experience. It is slated to be two stories and include luxury suits, merchandising, concessions, lounges and media rooms. Construction will begin when fundraising is complete, but the school’s hope is to break ground next spring.

“Updating the Pine Bowl and constructing an athletics-administration building will not only provide our football players and fans with a state-of-the-art facility equal to the excellence our team strives for each and every day,” Demant said in a press release. “but will also create a place where our coaches and staff can work more collaboratively to foster the amazing culture and camaraderie that exist between coaches, staff and student-athletes. Of Whitworth’s 2,700 students, nearly 25 percent are involved in athletics. “With that many student-athletes, a central athletics building will be a great thing,” Johnston said.