Absher and GGLO are proud to share that the Elson S. Floyd Cultural Center won multiple honors at the 2018 Design-Build Institute of America’s annual awards dinner. DBIA’s National Project/Team awards are given annually to projects that exemplify the principles of Design-Build Done Right™.

Additionally, it was also nominated for the Excellence in Teaming Award. 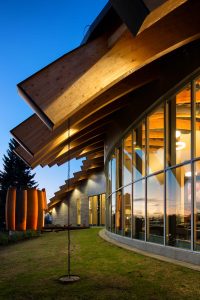 In order to avoid the high cost of running steam to the center, which is at the edge of the campus, the team proposed installing a boiler, to which the client agreed. On discovering basalt rock underlying the site, the team was able to adjust the design to push landscaping and parking into areas that had more challenging bedrock depths to avoid costly blasting and removal. And, by negotiating a price per cubic yard rate for the rock that was removed, the team saved 33% of the assigned value. Honoring late Washington State University President Elson Floyd, this 16,000 SF marquee facility was designed to celebrate the cultural diversity of the campus and heritage of the land. Cultural awareness and acceptance, a celebration of heritage, restoration of native landscapes and sense of place are expressed through the unapologetic, primal form of the building. The building not only celebrates diversity but also honors the site as the native land of the Nez Perce Tribe. Its organic shape and unique undulating